Things that go bump in the night.  A cold draft where there shouldn’t be one.  A hazy image of a young man perhaps in a Civil War uniform. 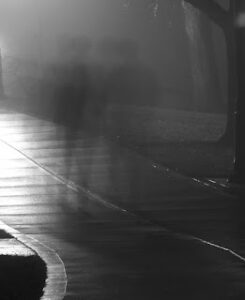 When I was a teenager, one of my best friends claimed a ghost inhabited her house.  I was never quite sure. But she believed it was real, and I believed her. I do know that some odd things went on that we could never explain. Too bad we didn’t have Ghost Busters to ferret out the truth for us. Or even better, paranormal investigators.

Today there are a number of paranormal investigative groups throughout the U.S. One of them is based right here in Wisconsin—The Wausau Paranormal Research Society (WPRS).  And they love ferreting out the truth about things that go bump in the night.

I first read about these paranormal investigators in the LaCrosse Tribune.  Every year about this time (October) the group sponsors a haunted walking tour of historic downtown Wausau.

According to the LaCrosseTribune article they also go on the hunt whenever they get a call about “doors opening on their own, apparition sightings, strange smells or objects moving by themselves.”  The reason they do it?  To find out whether paranormal activity is actually occurring. And apparently, most of the time it’s not.

“We don’t go into an investigation thinking it’s paranormal all the time,” WPRS investigator Bill Beaudry is quoted as saying. “We don’t jump to the conclusion that every creak, every knock, every sound is a ghost. We try to find a logical explanation.” Often as not that explanation has to do with plumbing or the electrical wiring. But sometimes they can find no logical explanation. And on rare occasions they might capture an auditory recording or even a photo image of something that isn’t supposed to be there. 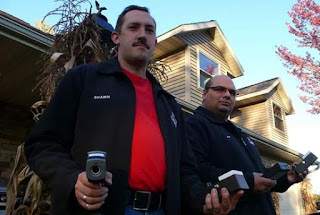 Shawn Blaschka and Jim Coscio of the Wausau Paranormal Research Society
Photo by D.J. Slater of The Wausau Daily Herald, courtesy of www.wprs.net

The team has quite an array of equipment with which to capture evidence of spirit life: digital video recorders, a night shot camera, an infrared sensitive video camera, various high-tech audio recorders, thermal probes, a variety of meters designed to detect changes in the electromagnetic field, vibration and motion detectors, a Geiger counter, and even a laser grid. They are determined to catch their ghost in the act—assuming there is one.

Some members of the team have had paranormal experiences of their own. Co-director Anji Spailek told the LaCrosseTribune reporter about an investigation during which she spotted a person wearing a work jacket and work pants, except that there was no one in that part of the building but her. She followed the figure into the kitchen area, but by the time she got into the room it was already gone.

At this point I was so intrigued I just had to find out more. So I contacted WPRS Director Shawn Blaschka by email and asked him some questions that had been haunting me. And he was kind enough to respond.

Shawn, how did the Wausau Paranormal Research Society get started?

Shawn: I joined the group in late 2000 when it was about 6 months old. By February 2002 disagreements with leadership forced the group to dissolve. I and another member immediately renamed the group and continued to operate as the Wausau Paranormal Research Society.

How did you learn to do what you do in terms of investigating possible paranormal experiences?

Shawn: Much of what I have learned was through reading various publications. My remaining education in the paranormal was received when I started with the original group and through years of experimentation along with trial and error.

About what percentage of your cases do you feel actually have a paranormal aspect to it?

Shawn: I would say maybe 10 to 15 percent have some form of paranormal activity or occurrences that can’t be readily explained.

Have you uncovered evidence of real ghosts?

Shawn: Proving the existence of ghosts is impossible at this point. Science demands that absolute proof or validation of a ghost must be able to be recreated in a laboratory setting many times over. I have captured evidence of what I think are spirits but again I cannot prove absolutely that they exist.

What do you do when you capture evidence of what you think are spirits? How do you follow up or help people resolve issues that you feel are truly paranormal in nature?

Shawn: Most of the help we provide comes in the form of education or validation of claimed events. Usually we are able to explain to the client what may be going on and then educate them regarding the issue at hand. Several times we have used the method of laying down ground rules. This consists of us speaking out loud to the entity and giving it rules to follow if it wishes to coexist with the present family living there. Of course the client must also follow rules as well for this to be successful.  We have had I would say about an 80% success rate with this approach.

Do you feel there are other paranormal explanations for some events other than “ghosts?”

Shawn: I think so such as telepathy, telekinesis, remote viewing, etc.

What is the most notable or unusual case your group has investigated?

Shawn: I think the place where we had the most unexplainable activity and captured the best photo of a spirit would have been at the Retlaw Plaza Hotel in Fond du Lac, Wisconsin.

[Note: Most paranormal activity at the Retlaw apparently centers around one room–#717–from which hotel staff and guests have heard screaming, banging on the walls, felt their hair being pulled, and experienced lights and faucets being turned on and off randomly. If you are interested in an overnight stay, you can check it out at HauntedRooms.com.]

Where, besides Wausau, have you gone to investigate paranormal reports? What is the farthest you have traveled to do this work?

Shawn: We have traveled all over the State Of Wisconsin. Also some areas of Upper Michigan and into Illinois. The farthest I have traveled to ghost hunt would have been Deadwood, SD and The Menger Hotel in Texas.

Do you and your investigators hold other jobs? If so, how do you balance work with paranormal research?

Shawn: We all hold a “normal job”, ghost hunting is not a profit making venture. We don’t charge for our services and never have. Most of us just work around our schedules and make the time to do the research and spend the time with clients that need our help.

You have quite a bit of equipment listed on your website. How do you fund your equipment and your investigations?

Shawn: The only funding we have for the group comes from doing our Historic Haunted Walking Tours each October and through the sales of our book, Haunted Wausau: TheGhostly History Of Big Bull Falls.

Do you get people calling you “Ghost Busters?” very often,  and if so, what is your reaction to that?

Sometimes we do but it is not what we are. Don’t get me wrong, I love the movie but the title is disrespectful in our eyes. We don’t get rid of ghosts, we try to help people through educating and finding non-paranormal explanations for our clients.

Are you affiliated with any other paranormal investigating groups? For instance, is there any kind of a national registry or organization that your group belongs to?

Yes, we are TAPS Family Members (Ghost Hunters from SYFY Network). We are area representatives under TAPS for the State Of Wisconsin.

~ My thanks to Shawn Blaschka for taking the time to fill us in on the work of the Wausau Paranormal Research Society and for all the WPRS team members for their work to delineate “where paranormal and reality meet.”