Can Mindfulness Rewire the Brain to Cause Kindness, Compassion, and Ease?

The
Dalai Lama issued neuroscientist Richard Davidson of the University of
Wisconsin-Madison a challenge: instead of spending so much time studying
conditions like fear, depression, and anxiety, why not apply your rigorous
scientific methodology to studying the qualities of kindness and compassion? That
was in 1992, and Dr. Davidson has been doing just that ever since. 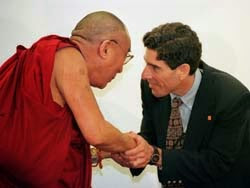 One
manifestation of Dr. Davidson’s work is the mindfulness training going on in
schools like Glenn Stephens Elementary, here in Madison where I currently teach. Our 4K classes have been learning the power of empathy and kindness through
mindfulness as part of their social emotional curriculum; and our fifth graders
and their teachers are learning mindfulness techniques as well. Both
experiences are part of larger research studies being conducted by the UW’s Center for Investigating Healthy Minds, founded and headed by Dr. Davidson.

This
week I was invited to watch and discuss an incredible documentary on the power
of mindfulness meditation (thank you, Marci of Backyard Yoga!) called Free the Mind: Can You Rewire the Brain Just by Taking a Breath? The
film traces two unique research projects at the Center for Investigating Healthy Minds. In one a group of veterans, all
suffering from PTSD, went through an intensive meditation training program. The
purpose of the training was to attempt to rewire their brains so that they could reduce the amount of daily trauma they were suffering. The research methodology was
rigorous, using MRIs, attitude inventories, and other methods of documenting and
analyzing emotional and physical changes in the men. A corollary project was
going on in the Waisman Center’s preschool program. The children participated
in compassion meditation training.

The
focus of the film was on two Iraq war veterans suffering from PTSD and a five
year old suffering from ADHD and extreme anxiety.  One of the veterans had witnessed
unforgettable horrors during the war including when one of his buddies had all
four limbs blown off. The other had been an intelligence officer and
interrogator and suffered immense guilt over what he’d done to others. The five
year old had many manifestations of his anxiety, but the most visible and heart
wrenching was his deep fear of elevators.

The men made measurable improvement
in their ability to deal with their PTSD in just seven days, with residual
effects in the months afterward. The film ended with the little boy getting onto
the Center’s elevator with a group of his classmates—although not without
trepidation—and riding to the sixth floor to look out the window from that
height.

I’ve
been reading a lot about the success various schools have been having with
meditation techniques such as Transcendental Meditation. Celebrities like Anderson Cooper and Jerry Seinfeld have reported on how learning meditation
changed their lives.  The technique used
by Dr. Davidson and the Center for Investigating Healthy Minds is called “mindfulness.” 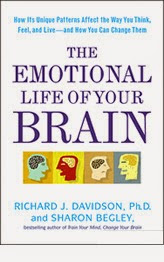 Dr.
Davidson is quoted on the movie’s website as saying, “We actually have no idea
of how conscious experience arises from this blob of matter that weighs three
pounds. It’s really still very much a mystery.” And, “The brain is the most complicated organ in the universe…we’re just beginning this journey [of discovering how it works].”  Watch for more posts on this subject as I begin to
explore my own mindfulness and the work of people like Dr. Richard Davidson.

If
you’d like to read more this topic, try these titles:


Read about my experience when the Dalai Lama came to Madison.